"Bytown" is the former name of Ottawa before it was changed in 1854. British Coloner John By (1779-1836) was in charge of the canal project. The city grew up between 1820 and 1840 from a construction base where the Rideau Canal diverged from the Ottawa River.

In 1865, the Parliament buildings were built high above the Ottawa River, and it was here that the first Canadian Parliament met following the founding of the Dominion of Canada in 1867. Together with all the attractions in Gatineau across the Ottawa River in the province of Québec, Ottawa has developed a rich cultural life. Universities and several research institutes have all contributed to this, as have such internationally famous institutions as the National Gallery and the National Arts Center, a venue for opera and concerts.

The Rideau Canal divides Central Ottawa, and the area to the north of it is known as Lower Town, and to the south as Upper Town. Lower Town is where you'll find the National Gallery of Canada, Notre Dame Basilica, and the lively Byward Market. The fashionable Upper Town extends below Parliament Hill and includes the Bank of Canada building, by architect Arthur Erickson, with its plant- and fountain-filled atrium.

Here are 7 Tourist Attractions in Ottawa for you to find out that the capital is one of the best places to visit in Canada and might be a reason for you to move into the city. 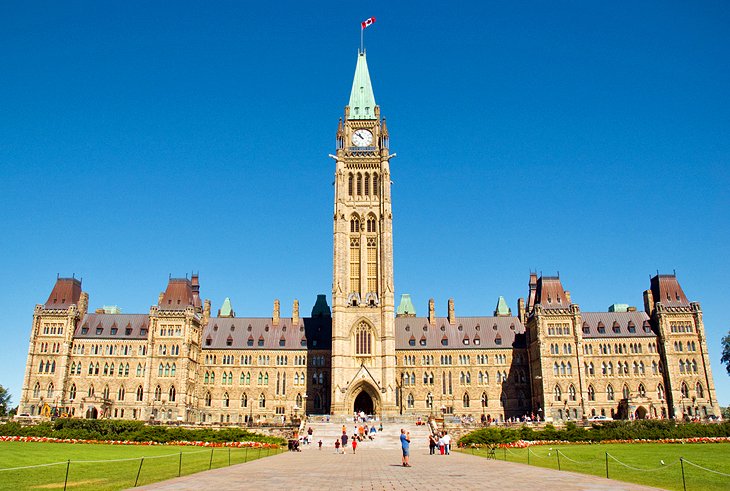 The Parliament Buildings, in all their splendor of Victorian Gothic sandstone, are quite an imposing sight on the 50-meter-high Parliament Hill (Colline du Parlement) looking out over the Ottawa River.

The Parliamentary Library, at the back of the building opposite the entrance, is a wonderfully furnished octagon that was untouched in the 1916 fire. You can explore the sprawling historic Centre Block on a guided tour, and the public can also attend a question period when the government is in session. 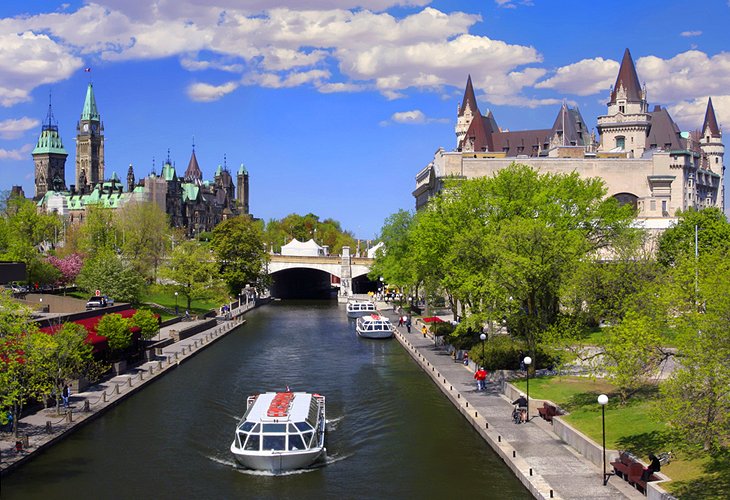 This is the 200-kilometer-long (but only 1.6-meter-deep) Rideau Canal, connects Ottawa with Kingston on Lake Ontario. Sometimes also called the Rideau Waterway, it was originally intended as a strategic route between Montréal and Lake Ontario, the military need for which was demonstrated during the war with the United States in 1812.

In summer, the canal and locks are active waterways. Fun things to do include taking a Rideau Canal cruise aboard one of the many tour boats that ply the water here (better still, splash out on an overnight cruise of the canal!).

As soon as it freezes over, though, the canal becomes a recreational area for festivals and skating, one of the favorite things to do in Ottawa in the winter.

Château Laurier is one of the grand buildings on the canal banks. Though it has the air of a medieval castle, it was actually built in 1912 and is a prime example of how big Canadian railroad companies added grand hotels (and striking landmarks) across Canada. 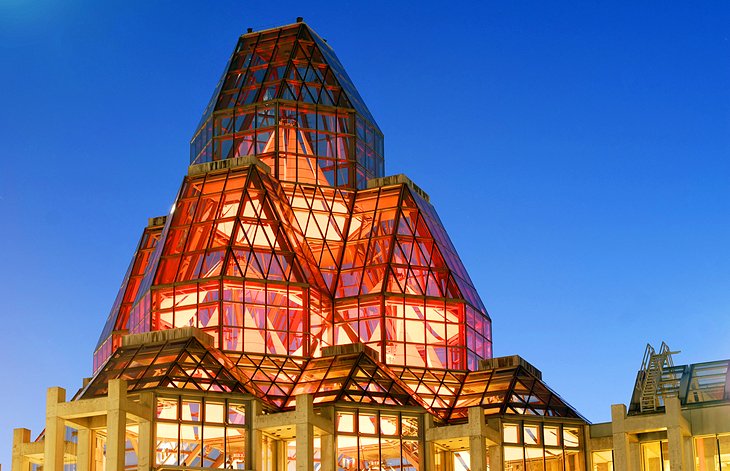 Moshe Safdie is the designer of this ultra-modern architectural masterpiece with prism-like glass towers that echo the lines of the nearby Parliament Buildings. The National Gallery of Canada is also known as Musée des Beaux-Arts du Canada. The glass contrasts with the mock medieval Château Laurier, yet the attraction still fits well into Ottawa's cityscape.

Inside what is one of the largest art museums in North America, galleries display aboriginal art, trace the development of Canadian art from religious works to the Group of Seven, explore European Impressionism, and show temporary exhibitions. The rooms of Inuit art are on the lower level under the glass-encased Great Hall. Admission to this fine gallery is free Thursdays from 5 pm - 8 pm.

For more sightseeing, the National Gallery is well placed near many other Lower Town tourist attractions, including Notre-Dame, the Canadian War Museum, and Major's Hill Park. 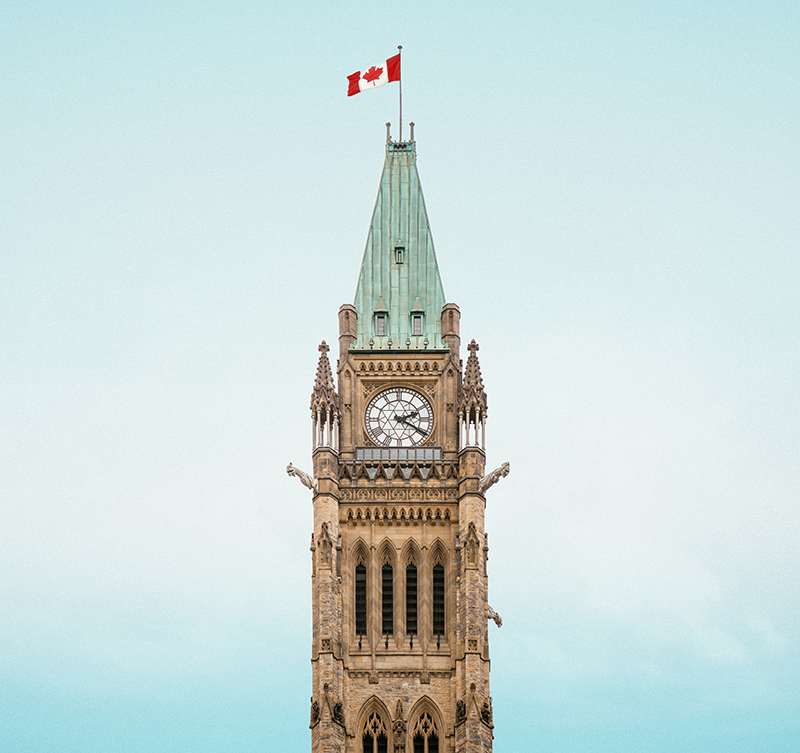 The panoramic view from the observation deck at the top of the Peace Tower (Tour de la Paix), the highest point in Ottawa, encompasses Parliament Hill, the entire city, the river, Gatineau, and the hills to the north. On your way up in the elevator, you will get a look at the tower's bells, and there is a memorial room for Canadians who died in WWI.

While access to the tower - sometimes also called the "Tower of Victory and Peace" - is free, you must first get a ticket. (Check the official government site below for details.) 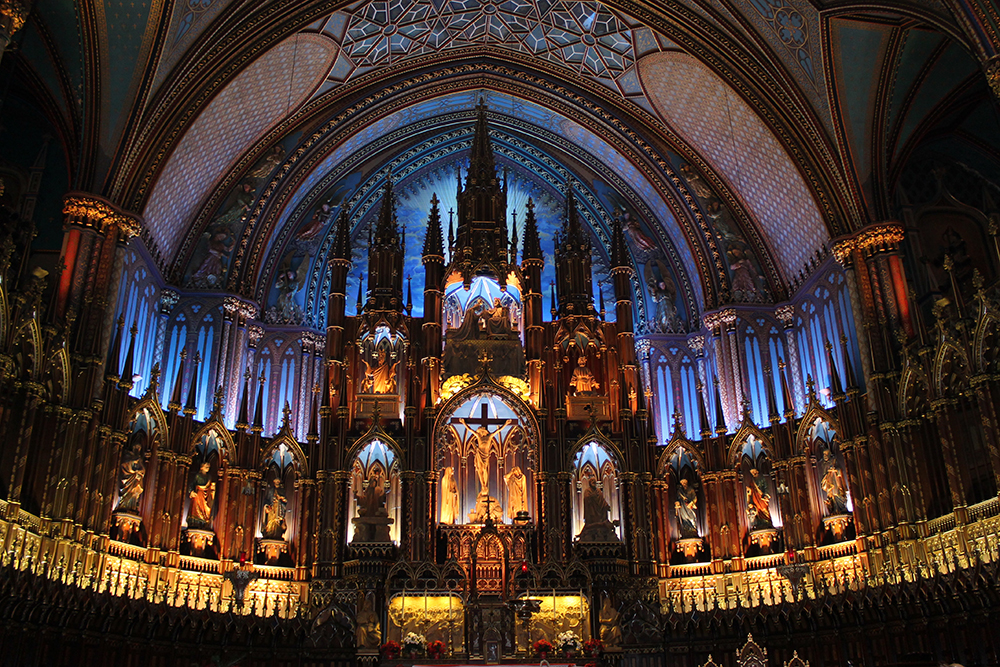 Notre-Dame Cathedral is a beautiful Catholic basilica consecrated in 1846. It is particularly noted for the interior mahogany carvings by Philippe Parizeau and figures of the four evangelists, prophets, and apostles by Louis-Philippe Hébert.

The stained-glass windows are particularly fine. The series of 17 windows picturing scenes from the life of Christ and the Virgin Mary was completed between 1956 and 1061, the work of Montreal artist Guido Nincheri. This historic building was constructed from 1841 to 1880 and is the largest and oldest standing church in the nation's capital. If you are a Catholic, you would love to attend mass in this beautiful basilica. 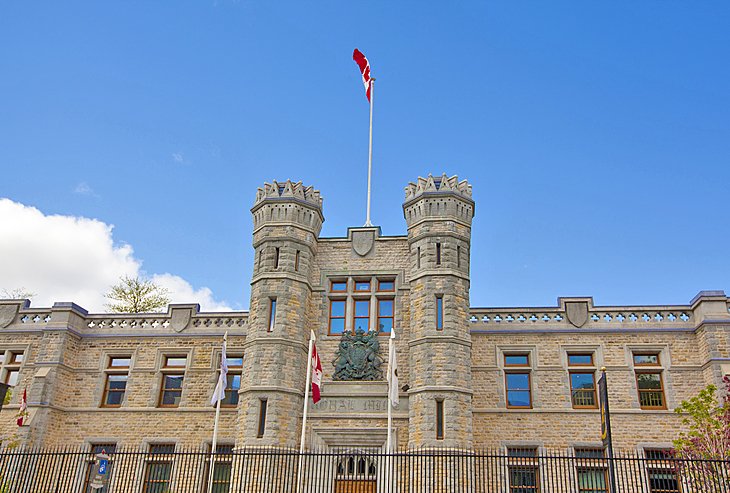 The tour here is fascinating, especially on weekdays when you can see the craftspeople at work. You'll also see one of three giant gold loonies (Canadian dollar coins) minted here, and get to hold a real gold ingot. Tour groups are small, so you should reserve a spot in advance. 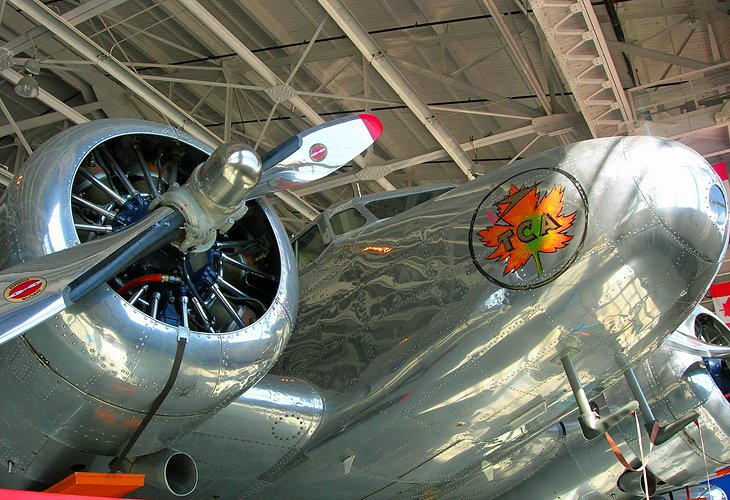 Telling in detail the story of Canadian civil and military aviation, the Canada Aviation and Space Museum (Musée de l'Aviation et de l'Espace du Canada) is located at Rockcliffe Airport, on the northern edge of town.

Among the aircraft on display is a replica of the Silver Dart, which in 1909 made the first flight in Canada, fighter planes from the First and Second World Wars, and some of the seaplanes and other aircraft that helped open up Canada's uncharted northern wilderness.

There you go, the 7 Tourist Attractions in Ottawa, but why just be a tourist when you can become a homeowner in the city? These places are just the tip of the iceberg, once you see the beautiful homes in the listing, you'll fall in love with them and will want to settle here.

You can call us today to talk about the HOT LISTINGS in the market. 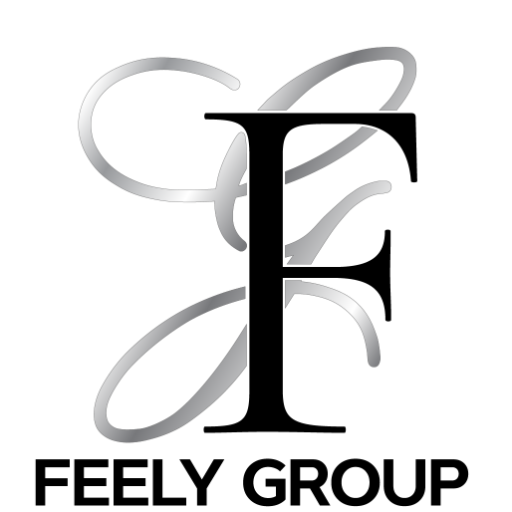 You know the song, the one that says it’s the most wonderful time of the year. Well, there is something to it. The current year coming to a close, celebration of Christmas and other

Know These 3 Things When Buying Your First Home

I love working with first-time home buyers. Helping you find your first home, learning the home buying process, and guiding you from house-hunting to move-in day gives me the warm fuzzies. Here are

We all want people to love our home as much as we do, but especially when you are trying to sell it! While it’s impossible to please every buyers’ taste, there are several easy things

Building a custom home is hard work that is rewarded when you move into the home of your dreams. The first step is finding the perfect lot to build on. Before you purchase a lot to build on, be

By setting up an account you agree to receive updates on listings by these means. *